Three-River Source is the place of origin of the Yellow River, Yangtze River, and Mekong River. Fittingly, it is known as the water tower of Asia as it supplies fresh water to the over 40% of the world’s population located there. As one of the most biologically diverse regions in China, Three-River Source is of great importance for maintaining ecological security locally, as well as to the integrity of the world’s ecosystem.

In 2014, as the major social organization dedicated to nature conservation in Three-River Source region, FGC launched a 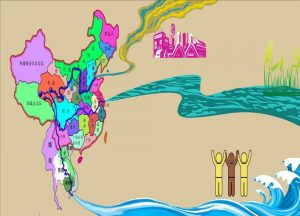 Ecological and Environmental Education in Three-River-Source

In 2016, this project expanded to four major conservation areas, influencing 21 villages and 6 schools. The extended project engaged local people in environmental protection activities by fostering positive environmental attitudes, teaching ecological knowledge, and developing protecting and patrolling skills.
By October 2018, this project has directly benefited 8405 individuals, including 6875 herders and 1170 students/teachers. It has indirectly benefited 55584 individuals, including 49704 herders and 5880 students/teachers. This project has won first prize in the Community Service Projects category of Ford’s Environmental Protection Competition in 2016.

Since 2017, FGC has worked intensively with a Tibetan community, Tuanjie Village, on Landscape Conservation and Livelihood Development. The ecosystem in Tuanjie Village is very fragile and its soil is subject to erosion. Once environmental damage happens, it’s extremely difficult to recover and the cost is huge. Therefore, the task of constructing an ecological civilization is of great importance. At present, Tuanjie Village faces the challenges of landscape destruction, household waste, wastewater management, community awareness, capacity enhancement, and livelihood development.

This project will increase the capacity of the community and school. It will also cultivate local, community-based organizations through participatory training and aid them in developing multi-stakeholder cooperation mechanisms with the goal of creating and registering a Community Conserved Area. This will promote sustainable management of local natural resources, recognition of the importance of natural and cultural heritage, and develop a community livelihood. Furthermore, it will display the successful results that can be gained from Community Conserved Areas, sustainable community development, and policy change through multi-stakeholder seminars.